December 2020 – The group have been awarded an EPSRC New Horizons grant for the development of a new type of enantioconvergent multi-component reaction. An associated PDRA position is currently advertised, please contact Andy for further details.

October 2020 – Sujlesh has completed her PGT MSc with Distinction! Congratulations Sujlesh, a richly deserved recognition of your hard work.

October 2020 – Welcome to Mária Štiblariková! Mária is a visiting PhD student from the Slovak University of Technology, in Bratislava.

September 2020 – Congratulations to Sujlesh on being awarded a School of Chemistry ‘2020 MSc Class Prize for Medicinal and Biolohgical Chemistry’! Here she is happily working in the lab with her supervisor Andy Tiberia. 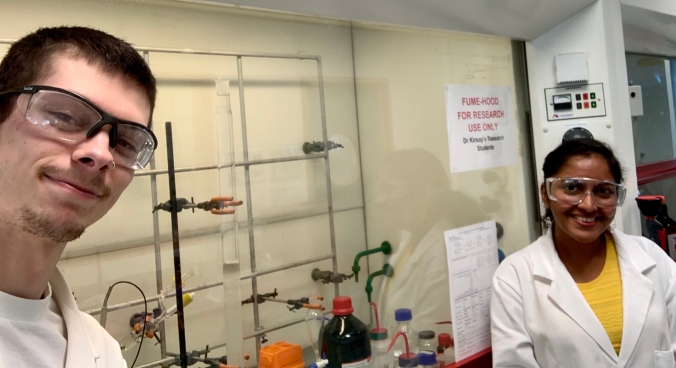 August 2020 – Andy has been promoted to Professor at the University of Edinburgh, as a Personal Chair of Organic Synthesis.

April 2020 – Rob has written a Behind the Paper blog post about his total synthesis of brevianamide A, which was published in Nature Chemistry.

March 2020 – Our most recent paper “Total Synthesis of Brevianamide A” has been published in Nature Chemistry. Congratulations Rob and Nick!

March 2020 – Congratulations to both of our undergraduate project students who have secured PhD positions. Kris will be moving to the University of Bristol to work with Prof. Varinder Aggarwal FRS, and Eilidh will be be moving to Queen’s University Belfast to work with Dr Stephen Cochrane.

January 2020 – Helen has been awarded a ScotCHEM PECRE award, which will enable her to undertake a research placement at the Australian National University in Canberra, with Prof. Mick Sherburn. Congratulations Helen!

September 2019 – Welcome to Eilidh Matheson and Kris Chambers, the newest members of the Lawrence group. They will be carrying out their undergraduate research projects in the group, working on biomimetic natural product synthesis. 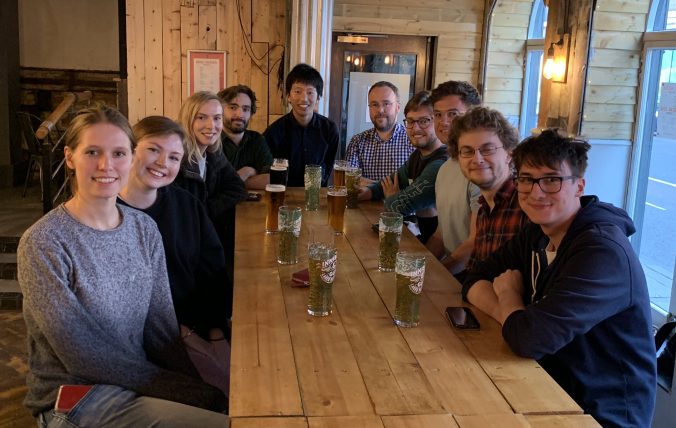 September 2019 – The group had farewell drinks for Naruhiro, a visiting PhD student from Kyoto University. Thank you for all your efforts and good luck on completing your PhD studies.

July 2019 – Many congratulations to Robert Godfrey for passing his PhD viva. Thank you Prof. Martin Smith from the University of Oxford and Prof. Guy Lloyd-Jones FRS for being the examiners.

July 2019 – Congratulations to Dr Marie Thomson and our undergraduate project students Elliot, Charlotte and Chenfei who all graduated yesterday!

May 2019 – The 2019 Lawrence Group Retreat was a great success! Glamping in Peebles (Scottish Borders) and then lots of fun at GoApe.

April 2019 – Welcome to Andrew Tiberia who has joined the group as a Criticat CDT PhD student. Andy will be jointly supervised with Prof. Guy Lloyd-Jones FRS (Lloyd-Jones Group).

February 2019 – Work from Rosie’s undergraduate research with Dr Daniele Leonori at the University of Manchester has been published in Organic and Biomolecular Chemistry, as part of the 2019 New Talent issue. Congratulations Rosie!

December 2018 – Many congratulations to Dr (almost) Marie Thomson for passing her PhD viva. Thank you Prof. Craig Butts from the University of Bristol and Prof. Guy Lloyd-Jones FRS for being the examiners.

November 2018 – Welcome to Dr Joshua Homer, the newest postdoctoral research fellow to join the Lawrence group! Josh joins us from the University of Auckland, New Zealand, where he completed his PhD under the supervision of Jonathan Sperry. He will be working on new enantioconvergent reactions and applications in target-orientated synthesis.

October 2018 – Andy was recently presented with the BMOS-RSC Young Investigator Distinction Award (a Chemical Communication and Organic & Biomolecular Chemistry journals effort) at the 17th Brazilian Meeting on Organic Synthesis (BMOS) in Salvador, Brazil. Thank you to the Royal Society of Chemistry and the conference organisers for an excellent trip!

September 2018 – Lawrence Group meet-and-greet for undergraduate students interested in doing their final year MChem 5P research project in the group will take place on Wednesday 3rd October at 16:00 in Room 235 (JB Building). We look forward to meeting you there!

September 2018 – Welcome to Jake, Rosie, Andrew and Jacob, the newest PhD students in the Lawrence group! They will be working on a variety of catalytic enantioconvergent reactions.

September 2018 – Welcome to Chenfei, Charlotte and Elliot, the newest members of the Lawrence group! They will be carrying out their undergraduate research projects in the group, working on biomimetic natural product synthesis and domino reactions.

August 2018 – Andy has been named as one of the 2018 BMOS-RSC Young Investigator Distinction awardees (a Chemical Communication and Organic & Biomolecular Chemistry journals effort). Andy will receive a certificate and present a talk at the 17th Brazilian Meeting on Organic Synthesis in Salvador, Bahia. 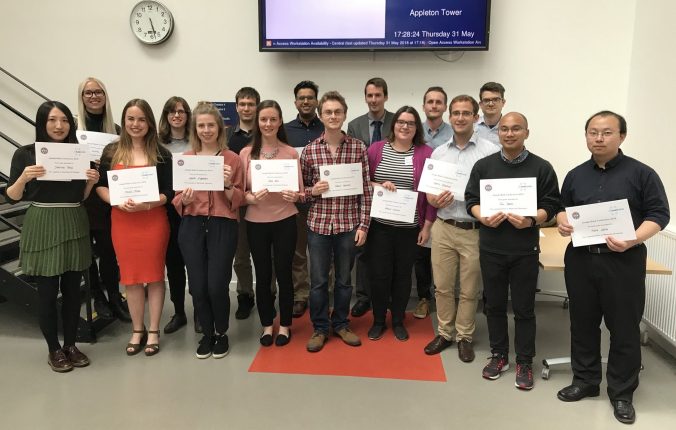 May 2018 – Helen and Catherine presented posters at the annual Organic Section Firbush Retreat. Helen was awarded a prize for her poster. Well done guys!

April 2018 – Patrick’s paper describing the total synthesis of incargranine A has been published in OBC as part of a special “2019 New Talent” collection and is now available online. Congratulations Patrick!

February 2018 – Dr Katherine Law has joined the group as a postdoctoral research fellow after spending two years working at the Herbicide Innovation Partnership between Bayer and the GRDC . Welcome to the group Katy!

September 2017 – Andy has been awarded an ERC Starting Grant, which provides the group with substantial funding (€1.5 million) for the next five years. Informal enquiries are welcomed for associated postdoctoral positions, which will be advertised soon.

September 2017 – Patrick’s review on the importance of biosynthetic considerations during the structure elucidation of complex natural products is now avialble online at Natural Product Reports.

August 2017 – Farewell to Ioanna Nakou who has spent two months in the group as an MSc student, working on the total synthesis of a complex alkaloid. Excellent progress was made and I am confident this tricky molecule will be made in the group soon! Ioanna will be starting her PhD studies soon at the University of Warwick in the Challis Group. Thanks for the Greek gifts!! 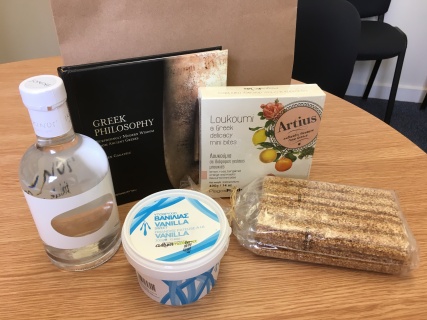 August 2017 – Farewell to Dr Nick Green and Dr Irene De Silvestro! Nick has completed his postdoctoral stay within the Lawrence group and is moving to the University of Cambridge to start a postdoctoral position in the Sutherland Group. Irene has completed her PhD and is off to the University of New South Wales in Australia to start a postdoctoral position in the Morris Group. Good luck guys, you will both be missed!

July 2017 – Marie is competing for the Sparrho Early Career Researcher Prize. Marie has been interviewed and has produced a website for this prestigious prize. Good luck Marie!

July 2017 – Nick and Marie recently presented posters at the 18th Tetrahedron Symposium in Budapest. Nick was awarded a prize for his poster Biomimetic Synthesis of Unnatural Products. Well done guys!

June 2017 – Ioanna Nakou has joined the group to undertake an MSc research project focused on the biomimetic synthesis of a complex alkaloid. Welcome to the group Ioanna!

June 2017 – Rob was awarded the prize for best poster in the synthesis and catalysis section at the Joseph Black Conference today. Well done Rob, great job!

May 2017 – Irene has been awarded a grant by the organising scientific committee to attend and give an invited talk at the 4th International Workshop on Pericyclic Reactions and Synthesis of Hetero- and Carbocyclic Systems (Milan, 28th-30th June).

May 2017 – Marie has been awarded an RSC Travel Grant to attend and present a poster at the 18th Tetrahedron Symposium (Budapest, 27th-30th June).

May 2017 – Andy has been awarded the 2017 RSC Hickinbottom Award for “biomimetic approaches to total synthesis involving cycloadditions, characterised by brevity and elegance”

May 2017 – Our most recent paper – “Total Synthesis of a Dimeric Thymol Derivative Isolated from Arnica sachalinensis” has been published in Angewandte Chemie International Edition as a Hot Paper, well done Irene and Sam!

April 2017 – Our most recent paper – “Total Synthesis of (−)-Angiopterlactone B” has been published in Organic Letters, well done Marie! 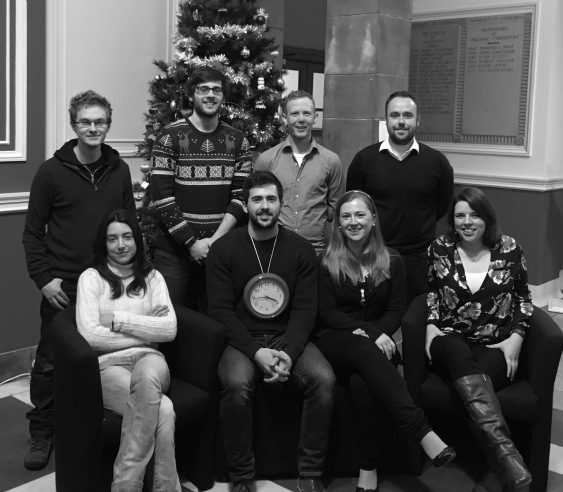 November 2016 – Work from Marie’s time as an undergraduate, working with Dr. Iain Smellie at the University of St Andrews, has been published in the Journal of Chemical Education. Congratulations Marie!

September 2016 – Koen and Catherine have joined the group to undertake undergraduate research projects. Welcome to the group!

September 2016 – Patrick’s paper “Total Synthesis of Millingtonine” has been highlighted by Professor Erik Carreira in SYNFACTS!

June 2016 – Dr Nick Green from the research group of Prof. Mick Sherburn (ANU, Canberra) has joined the group as a postdoctoral research fellow. Welcome to the group!

June 2016 – Irene has been selected to give an oral presentation at the New Zealand Institute of Organic Chemistry Conference in Queenstown, NZ (August 21-24, 2016). Congratulations Irene!

June 2016 – Rhiann Ankers has won the “Louis Cohen – 2016 MChem Project Prize”. That makes it two years in a row that a student from the Lawrence group has been awarded this prestigious prize. Congratulations Rhiann!

June 2016 – The group welcomes back PhD students Irene De Silvestro and Peter Dabell, who have spent the last two months at the CSIR-NCL (Pune) on research placements. 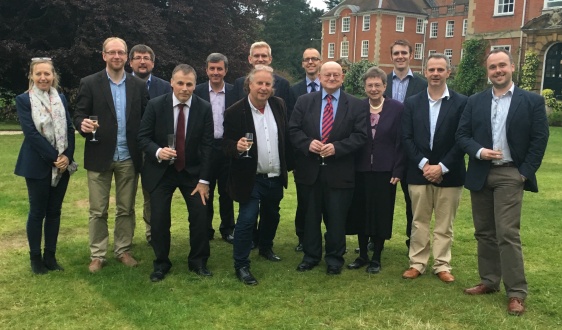 May 2016 – Many congratulations to Dr Patrick Brown for passing his PhD viva, with Prof. John Moses from the University of Nottingham as external examiner and Prof. Guy Lloyd-Jones FRS as internal examiner.

April 2016 – Our most recent paper – “Total Synthesis of Millingtonine” has been accepted for publication in Angewandte Chemie International Edition, well done Patrick!

February 2016 – The group has been awarded an EPSRC First Grant. This grant will provide funding to investigate the gram-scale biomimetic synthesis of natural products with potent biological activities. Informal enquiries are welcomed for the associated postdoctoral position, which will be advertised formally in due course.

December 2015 – Peter’s MChem project work with Professor John Walton at the University of St Andrews, entitled “Bicarbonate and Alkyl Carbonate Radicals: Their Structural Integrity and Reactions with Lipid Components” has been accepted for publication in the Journal of the American Chemical Society. Congratulations Peter!

December 2015 – Andy has been named as a 2016 Thieme Chemistry Journal Awardee. These awards are given to individuals loosely defined as promising young professors at the beginning of their career.

October 2015 – Rhiann, Connie and Duncan have joined the group to undertake undergraduate research projects. Welcome to the group!

September 2015 – Marie Thomson has joined the group as a PhD student. Marie completed her MChem (with a year in industry at BASF, Germany) at the University of St Andrews in 2014 and has spent the last year traveling in South East Asia and Australia. Welcome to the group!

July 2015 – Rebecca Burns has won the “Louis Cohen Endowment Prize” in recognition of the excellence of her MChem Honours research project that she completed within the Lawrence Group. Congratulations Rebecca!

May 2015 – Irene was awarded the runner-up prize for her poster presentation at the Joseph Black Conference. Congratulations Irene!

April 2015 – Our most recent paper “Unified Total Synthesis of the Natural Products Endiandric Acid A, Kingianic Acid E, and Kingianins A, D, and F” has been accepted for publication in Chemical Science. This paper represents the completion of a highly productive collaboration working with Prof Mick Sherburn (Sherburn Group). Congratulations Sam!

April 2015 – Welcome to Peter Dabell who has joined the group as a Criticat CDT PhD student. Peter will be working under the joint supervision of Andy and Dr Stephen Thomas (Thomas Group).

April 2015 – Patrick has won the Prize for Best Talk at the SCI Postgraduate Symposium on Novel Organic Chemistry (Strathclyde University) for his presentation “Biomimetic Synthesis of Phenylethanoid Alkaloids”. Congratulations Patrick!

December 2014 – Our most recent paper – “Total Synthesis of Ramonanins A-D” has been accepted for publication in Angewandte Chemie International Edition, well done Emily and Ross!

October 2013 – Patrick’s work – “Total Synthesis and Structural Revision of the Alkaloid Incargranine B” has been accepted for publication in Angewandte Chemie International Edition, well done Patrick!

October 2013 – The Lawrence Research Group will be moving to the University of Edinburgh in November 2013.

July 2013 – Our synthesis of kingianins A, D and F has been highlighted in “Chemistry World” in Paul Docherty’s “Totally Synthetic” column.

November 2012 – Patrick recently graduated and received a University Medal. Congratulations Patrick! Patrick will be commencing his PhD studies in the Lawrence Group in February 2013.

October 2012 – Patrick’s paper “Total Synthesis of Incarviditone and Incarvilleatone” has been highlighted by Professor Erik Carreira in SYNFACTS!